Dennis has a long history with baseball in Hamilton having served as President of both the Hamilton District Baseball Association and the Hamilton Baseball Umpires Association.  He has also served as preside of Baseball Ontario and has been a rep for Baseball Canada.

In 1957, Dennis Ryan began his umpiring career.  As a member of the Baseball Ontario executive, Dennis worked tirelessly to improve officiating in the province. He was elected Preside of Baseball Ontario in 1989 and following his term was appointed Provincial Supervisor of Umpires in 1992.

During his time as Supervisor, Skip (as he is affectionately known) increased the involvement of Ontario umpires in the National Program by facilitating an open invitation to recommend umpires in the province.  In 1993, Dennis earned Senior Course Conductor status at the inaugural Baseball Ontario Umpire Caravan and in 1994, led the first “All Ontario” Umpire Caravan.  He achieved Master Course Conductor status in 1995.  Dennis is an Honourary Member of Baseball Ontario and a Life Member of both the Hamilton District Baseball Association and the Hamilton Baseball Umpire’s Association.  Dennis retired from Baseball Ontario National Umpire program in 2007 and retired from baseball in 2010. In 2016, Dennis was awarded the Baseball Canada Hume Run Sports Lifetime Achievement Award for meritorious service.

Glenn Ostrosser awarded the honour of Hamilton’s 2018 Volunteer of the Year.

Glenn is a long time HDBA rep, having served as a Mahoney director and past President, HDBA Director, HDBA/OBA rep and is currently serving as a Baseball Ontario Director. Glenn was nominated on the basis of his involvement in the CANUSA Games and every year takes great pride in having Hamilton teams participate in the games. 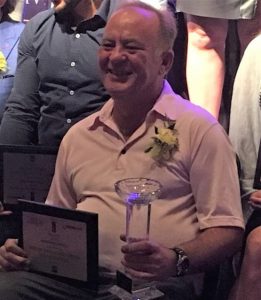 “When I first took my son when he was 6 in 1986 to sign up at Mahoney after a couple years at Kiwanis T-ball I asked if I could help coach a team. The person they sent me to talk to was Glenn. In all the years since I have depended on Glenn for assistance and guidance and friendship and I will be forever grateful for that.

On behalf of the thousands of kids that you have impacted and the hundreds of guys like me that have impacted thousands more that you have mentored and helped along the way. Congratulations, this is a huge accomplishment. You are a great ambassador for our sport and I cannot think of anyone in any sport more deserving!”